I’m really grateful to Louisa and the staff for making me very welcome.

I’m delighted to announce that the book is available to buy at the Chapel-en-le-Frith Post Office. I’ve received some really good reviews which I’m collating on my website simonehubbard.com . A big thank you to Tim and Jane at the Post Office for giving me this opportunity 😀 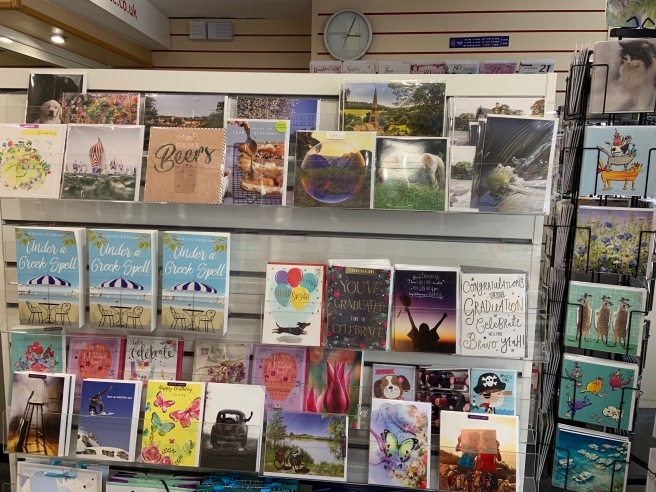 Under a Greek Spell has been travelling around the globe even more than me!

Thank you to everyone who took the time to take a photo of the book on location. Some of the places are Fuerteventura, Gran Canaria, Skiathos, Skopolos, Barcelona, at least three holidays to Paphos where the story originated from, Turkey and the Norwegian Fjords with me and last and but not least Las Vegas with Dianne and Lynda. 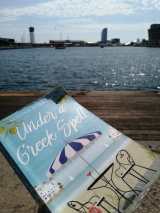 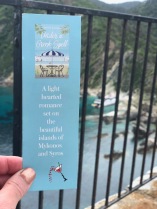 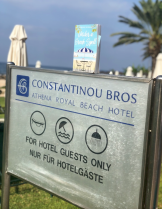 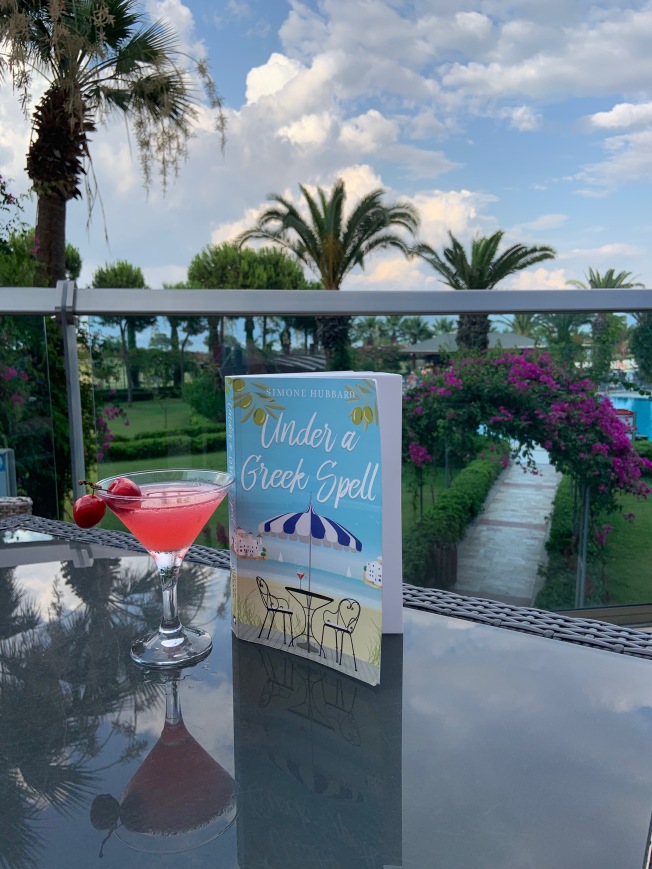 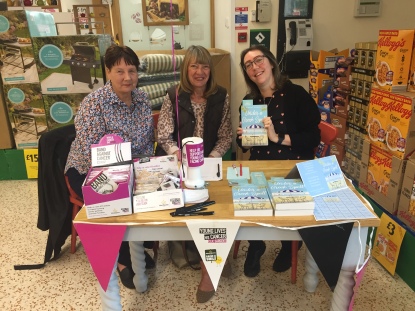 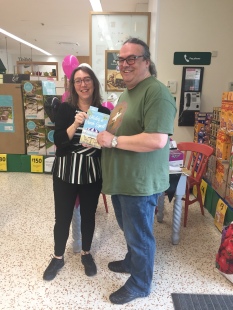 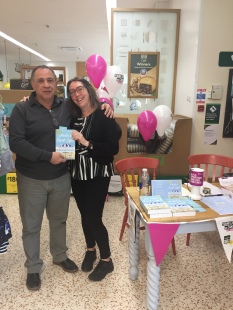 Wow what a busy few months since the launch of Under a Greek Spell. Since the three ‘Meet the Author’ evenings at Rems I’ve met people at my events at Itsy Bitsy and  Morrisons at Chapel-en-le-Frith. I was also invited to Janes bookclub which was a lovely evening at The Roebuck.

I’ve received lots of encouraging feedback so need to think seriously about writing another novel – maybe a sequel?

I’ve been on lots of holidays this summer and so has the book. Thank you for all your photos – keep snapping away. I’ll post the photos of Under a Greek Spell on vacation next week when I get back from my 3rd holiday of the summer 😎😵 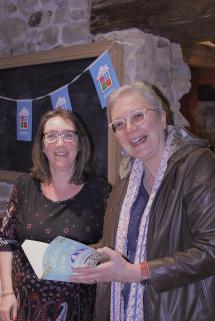 Another fantastic night at Rems for my second book launch for –
Under a Greek Spell.

I used the same format as the first book launch a couple of weeks ago which had worked very well. We start our evening with questions that Pippa and I think cover the most popular questions that guests would like to know the answers to. For example –
‘Tell us about your characters and where they came from?’ I think people are curious to know if I’ve used them in the story 🤔. Of course they’ll have to read the book and see if they recognise themselves 😂
We then open the floor to questions from the audience and last week the questions were abundant which was great. No need to use our backup questions, so thank you to all my guests for joining in.

So now looking forward to the third book launch on Wednesday again at Rems which has proved to be a perfect venue so thank you to Gareth and the team and thank you to Meg & Ruby who took lots of photos which I’ll share very soon. 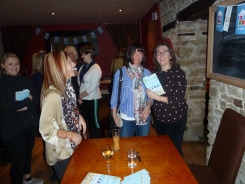 Fantastic night at Rems for my first book launch of my debut novel Under a Greek Spell.

It was a huge success and I’m so grateful to everyone who attended and made it such a special evening.

Please visit my website simonehubbard.com for more information about future book launch dates and information on where to buy the book if you can’t come to either of the events.

I’ve been busy in the last few weeks making some finishing touches to the book. There’s been acknowledgements, thank you’s, an afterword and the dedication to write. I’ve also given the green light for the cover which I’m really pleased with and I’ve finally signed my pass for press.

This means the book is scheduled for its first print run and I should be on target for my publication date of 28th February 2019!

The next step will be organising some book launch dates with opportunities to get a signed copy. So look out for the dates which will be announced in the next few weeks.

Since submitting the manuscript in September I’ve had loads of decisions to make. Choosing font styles and sizes, page sizes, whether I want running heads, fonts for the running heads, the front cover (to be revealed very soon) and now the proof-readers returned manuscript shown above.

As I’ve said from the beginning this whole process has been a steep learning curve (i.e vertical line😂). The proof-read standard used on my book is BS 5261 part 2. Knowing such a thing existed could have saved me hours as I messed about with spaces around my ellipses …lol

So the photo above is how a 300 page novel looks. It’s almost ready to be posted back with my approval of the proof-readers alterations plus some of my own. Hopefully I haven’t gone overboard otherwise the typesetters will be sending me an invoice for the extra work incurred to set it out again 🤑 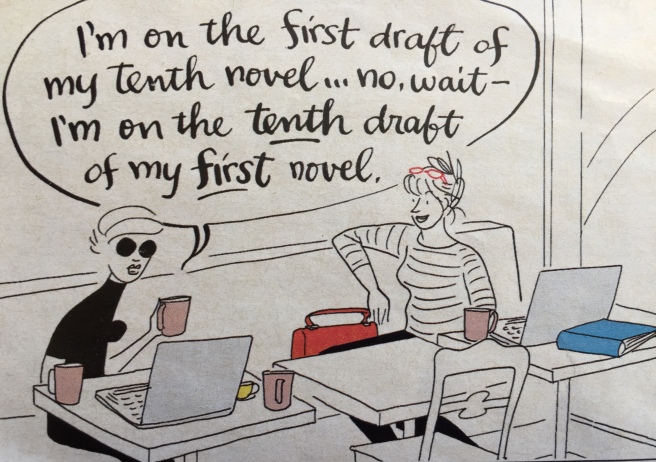 My friend Joanne gave me this cutting more than a year ago. Little did she know that it would be so accurate. Many drafts and edits later Under a Greek Spell is now in the Matador system and won’t be allowed out until it’s in the format of a book.

Since the last blog there have been a few tweaks regarding copyright as no author wants to be facing a lawsuit for breach of copyright.

I’ve produced an Advance Information sheet which tells retailers about the story.  So everything crossed for a retailer to spot it amongst the thousands of others and decides to stock my book. (I’m looking for good planet alignment here – right place, right time 🤩) Perhaps I should have consulted with Russell Grant before I sent it.

I’ve also written an ‘Author Bio’ which is the bit that goes in the front of the book. It’s very short 😂.

One of the biggest decisions has been regarding pricing, with mind-boggling facts and figures regarding commissions deducted and profit margins. That subject could lend itself to a whole blog in its own right 😴

The next decision will be font size and style. Matador will produce the first 20 pages in their suggested format which will be awesome 😵

I did briefly feel like having a party to celebrate this milestone event but then realised I’ve now got quite a lot of things to do before I can crack open a bottle of champagne.

I started writing my first novel Under a Greek Spell in July 2013 and yesterday I finally sent the manuscript to be self published with Troubador Publishing Ltd.

I have been on an incredible journey which is in itself a topic to write about another day. For now though the manuscript is on the final part of its journey. In spring next year if all goes to plan it will be a book.

The learning curve for writing the book has been more like a vertical line and I will share some of these experiences with you over the coming months.

As things like the book cover evolve I will be able to share these as well. For now I’ve purchased the above clip art image (vector) from 123RF.com as my pile of books image didn’t look very inspiring or professional. If I had some 21st century computer skills I could have rotated the title of my book on to one of the books on the shelf but as I haven’t the book title on the wall will have to do 😂